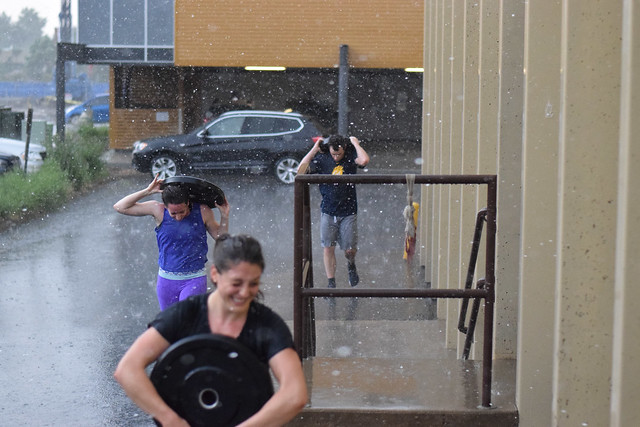 The weather never stops us!

We recently posted about Dynamic Knee Valgus and how exposing your knees to the demands of sport without some level of general physical preparedness can increase your risk of injury.
More broadly, if an athlete does not train to a base of general physical fitness, sport exposes the athlete to increased risk.
Who’s at particularly high risk? Kids are. Young adolescents are far more likely to participate in sport than a strength and conditioning program that develops GPP. And sport leads them to extreme demands on their athletic capacity. Imagine a 13 year-old soccer player changing directions quickly, accelerating, and then jumping in the air to kick a bouncing ball. An aberrant movement (twisting an ankle, torquing a knee, landing from the jump awkwardly) or collision with another player could easily lead to injury. The stronger an athlete is in his midline, the more likely he is to avoid aberrant movement; “combat, nature, survival, and sport favor individuals who keep bodily and spatial awareness regardless of their orientation in three-space” (Foundations).
Lots of people in the field think it’s this imbalance – sport without preparation for sport – along with specialization and overuse that have led to the dramatic rise in youth sports injuries. One way to consider that hypothesis generally is to ask whether or not specialization, time playing a sport, and competitiveness have gone up in youth sports. If you think they have, then combine that with the fact that kids spend more time in front of a screen and therefore less time playing outside (unorganized play, playground, running around). Post thoughts to comments.
By crossfitroots|2016-07-17T18:57:05+00:00July 17th, 2016|Workouts|0 Comments